Football Saturdays always stretch our focus in plenty of directions. Northwestern didn’t beat Nebraska on Saturday, but there was a story I learned about over the weekend, which was greater than any win or loss, and I wanted to share it. 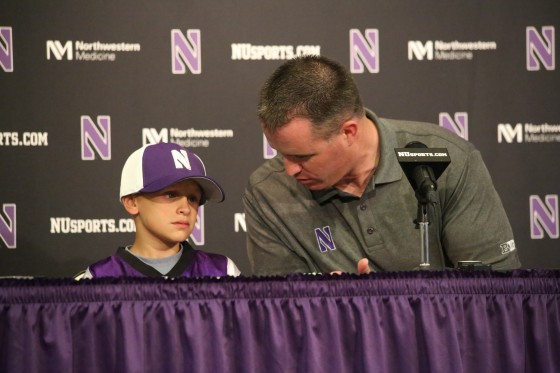 And though he can’t “see” it, he can certainly “feel” it.

Because of various medical complications over the last year, Jake lost vision in both of his eyes. Within the past month, and thanks to a Pat Fitzgerald family connection, this 8-year-old boy has become a part of the Northwestern football family.

Jake was at the Nebraska game on Saturday night. It was just the third Northwestern football game he has ever attended in his life. For the first two games, against Western Illinois and Wisconsin, his favorite team came away with wins. This past Saturday against Nebraska, like those first two games, Jake spent the night with the Fitzgerald family in the press box. In fact, Pat Fitzgerald said his oldest son has been known to sometimes sit with Jake during the game. He will give him the play-by-play, so Jake can appreciate what is going on.

After the Western Illinois win, he got the thrill of his life.

Watch this video, provided by NUSports.com — and experience what Jake Scheid did in the locker room. It’s why sports are so cool, win or lose.