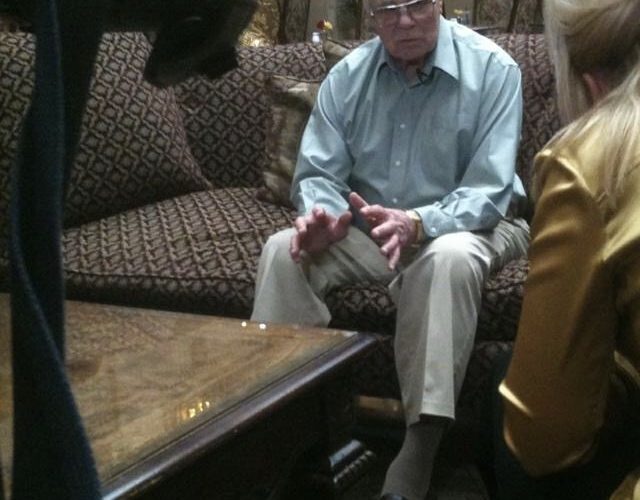 “WHERE the hell have YOU been?!” barked the voice on the other end of the phone.

It was true. I was many days tardy in calling Jud Heathcote to wish him a “Happy Birthday.” I had begun to make it a habit since 2009. But I really didn’t think, during this particular year, he would notice my absence. But nothing got past him. Though his body was failing him, his mind and wit were still running at a good pace. Even in his late 80s.

This was the only reliable way you could get a hold of Jud — to pick up an actual phone and call him. He didn’t text. He wrote actual letters, and he SWORE by snail mail.

My direct interactions with him came during the final 15 years of his life. I never knew Jud when he coached. But as a little girl growing up in the state of Michigan, I watched plenty of his games.

When I first met Jud, I was a cub reporter at WLNS in Lansing, Michigan. I only had a few interviews with him, which came when he would return to Mid-Michigan for an MSU basketball game. Since he lived in Spokane, Washington, his visits to Michigan became less frequent. And that meant our interactions were few and far between. He had no reason to remember me. I was just starting out in the business, and I was essentially the backup to the backup to the backup in the local TV world. After one of my few interviews with him, we joked one day about his choice of socks to wear at a function. Random, yes. But he didn’t forget.

His birthday rolled around in 2009, and my boss at WLNS, Fred Heumann, said he was thinking of calling Jud. I said, “Tell Jud your reporter says Happy Birthday too!”

Fred said, “Actually, why don’t YOU call him?”

“He won’t know who I am,” I was muttering to myself.

I didn’t have his phone number. Instead of asking for it, I remembered a story about Jud keeping all of his info public. So I decided to test the theory, and I went old-school and called information.

“Home phone number for Jud Heathcote in Spokane, Washington, please,” I said to the operator.

“Here you are,” she replied.

It was just that easy?

Maybe the stories about Jud keeping his home number listed in the East Lansing phonebook, while being the MSU head coach, were true.

What public figure does THAT?!

He was real. And he wouldn’t be afraid to show that “real” to anyone…and as it turns out, to anyone who might call.

I dialed his number.

“Hi, Jud? This is Lisa Byington, I work for Fred Heumann and I’m the reporter at WL…”

Our conversations always only lasted a few minutes. And they were long enough for him to ask more questions about me, than I could of him.

He stubbornly preferred it that way.

While I was in Lansing, I would send him DVDs of stories we would do about Izzo or MSU basketball. Throughout the years, he became a loyal viewer of my career, even after I left Mid-Michigan.

“Thanks for the golf balls you sent me, Socks,” he would say, “I made sure to put them to bad use.”

“My wife thinks you’re a doll, but remember her taste is not the best as we have been married for 52 years.”

I called him not once, but twice.

The first call came before the national championship game. His Gonzaga connection has been well-told. Since Jud lived in Spokane, he had developed quite the friendship with Mark Few and his program. They would try to have lunch at least once every month. Of course, the Zags were playing for the title that night.

“I try to give Mark (Few) advice. He never takes it,” Jud deadpanned.

When May 27th came around this year, it was for his 90th.

I smiled while I waited thinking … “ at least I was on time this year.”

“Well at least you are on time this year!” Jud’s voice rang through on the other side.

The call lasted our usual handful of minutes.

He told his normal jokes, but had a more serious side to him this time. He mentioned his excitement for the next day, May 28th, when he would have a 90th birthday celebration with his family, including his grandchildren, about 80-90 total in attendance.

Before we hung up, which ended up being for the last time, Jud said, “Socks, make sure you always wear the right pair, and keep up the good work…….I’m proud of you.”

I came to the conclusion that I was first intrigued by Jud Heathcote because of his sideline antics. The pounding on the head. The screaming. The ball bounce to his chin. The personality.

That was my intrigue.

The impact I felt from Jud Heathcote was this: Jud saw beyond the obvious. He not only saw basketball X’s and O’s, but he specialized in noticing things about people and situations no one else did.

How did he convince Magic to play for him? How’d he get the hunch to see Scott Skiles play a second time in high school, after he tanked the first time Jud watched? Why was Steve Smith such a needed get? What did he see in an unproven graduate assistant named Izzo from the Upper Peninsula, who eventually became a Hall of Fame coach? What kind of leader did he see in a basketball manager named Hollis? And why did he remember and befriend a no-name TV reporter from Lansing? He found the “special” in YOU.

“He died peacefully,” she said about his Monday passing. She then described how much having that final 90th birthday celebration meant to him.

“You just never know about tomorrow,” she said.

While she was not the first to make that realization, it still hit me like a Jud thud to the forehead.

You are missed, Jud.