The Most Wonderful Time of the Year…. 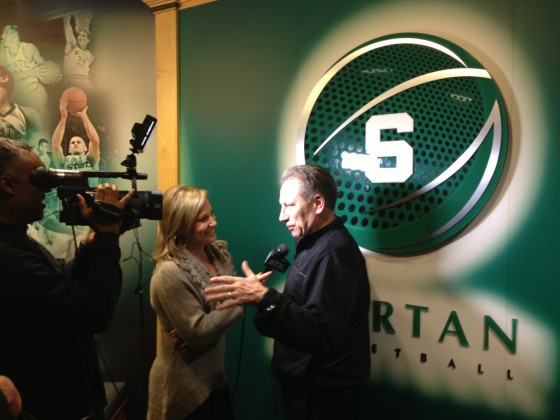 I was working for BTN Sunday, at MSU’s Selection Show, when the Spartans’ opponent’s name appeared: Valparaiso.

Valpo. I remember them. And its current head coach.

I was in college at Northwestern when Bryce Drew hit that game-winner in 1998, and dove to the floor in celebration. I watched with my basketball teammates at the time. I was so moved by the moment, I told my teammates, “I’m going to write him an email thanking him.”

This IS the most wonderful time of the year. Full of lots of moments. There is no other event: the SuperBowl, World Series, BCS National title games, which captures my heart like March Madness.

One Shining Moment is my favorite song in the world. Like ever. When it first came out, I took my cassette tape recorder and held it up to the TV so I could record the song and play it whenever I wanted. When the song was released later, I kept it in the CD player of my car for two straight years, and never took it out. Today, I still cry watching the CBS montage.

Ironic, I guess, that the first year of “One Shining Moment” coincided with my all-time favorite memory of the tournament.

Indiana’s Keith Smart hit that corner jumper to win it all. I was a 5th-grader at the time, got to stay up late to watch, and I had a batch of brownies on the line, as a friendly bet I made with my gym teacher. When that shot went through the hoop, chills went through my body, and I think it was the first time I understood what it feels like to see a dream realized. It was late and cold that night, but I still proceeded to take the balloon I had blown up as a basketball, and dribbled it around the kitchen floor like it was my championship court.

I am older now, but this time never grows old.

They are my three weeks of tears, both happy and sad.

Of Cinderellas who inspire and Goliaths who impress.

Of little kids who watch their first game-winner, and adults who live through that moment.

Of heroes whose names were anonymous, but one twinkle in time turned them household.

Of a time that touches my every emotion, every year.

Of a Sunday which gave me chills again because my song is up next.

The Ball is Tipped …