Hoosiers and Huskers … Batter Up …

As I unpack my bags from the B1G baseball tourney, and file away my notes, I also empty my thoughts on some Hoosiers and Huskers ….the final two teams standing in the B1G tournament:

They were. And were fun to watch.

TALL ORDER
Had to improvise when interviewing 6’10” Hoosier hurler, and the B1G Pitcher of the Year, Aaron Slegers. Photo courtesy: Indiana … a handful of these (from different angles) were taken in the Hoosier dugout as this interview was going on. Apparently, they have never seen a reporter stand on a bucket before!?! What gives? 🙂 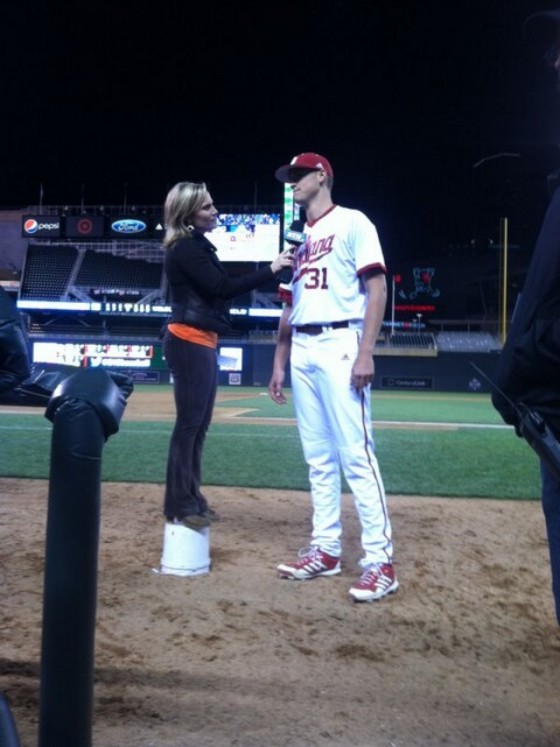 HOOSIER CHEMISTRY
Indiana baseball had something special brewing even last year. Coaches and players always talk about growth and maturity. What does that look like?

Head Coach Tracy Smith painted the picture to me last year at the 2012 B1G tournament:
“We’re sitting on the bus, driving to the field to play, and the team is just back there talking anything and everything. I said to my assistants, ‘Listen to that. It’s driving me crazy, but I’m not going to say anything because that’s kinda the personality of this team. As long as they’re getting the job done and playing the way we want …”

The story changed just a bit going into this year’s B1G tournament: “Their reaction to success has really been the true example of their maturity,” Smith said. “After we beat Louisville, they were silent on the bus ride. (And after Indiana won its first outright title since 1932), they were silent on the bus back from Columbus. I was shocked, but it just shows they have loftier goals than what they have accomplished.”

Senior shortstop Michael Basil agreed, adding those goals were made last Fall, when the team set out to win the B1G regular season, the tournament title, and then get to Omaha.

SUPERSTITIONS GALORE …
Don’t get me wrong, these Hoosiers still have fun.

The latest and greatest Indiana superstition began on the last weekend of the regular season. It was called “Dub for the Stub”. Meaning, get a win, or a “W”, or a “Dub”…and you can grow a stub, or don’t shave until you lose.

So Indiana players (and coaches, mind you) had grown some impressive stubble after about a week’s worth of work. (The no-shave period stretched from the Ohio State regular season finale to this past Saturday’s championship game vs Nebraska). Indiana lost Saturday night to the Huskers, and Tracy Smith told me going into Sunday’s championship game, “I didn’t remind them, I didn’t say a word, but when all the players came down for breakfast this morning, they were all clean-shaven,” he laughed and said, “I knew at that point, we were ready.”

Coming from the man who should know. Coach Smith puts the “super” in stitious. He is the ultimate superstitious baseball guy, and you have to wonder if there is something to it. Every TV game when he did an in-game interview this year, the opposing team scored in that inning. It wasn’t until Saturday night, when Smith brought it up on the air to Eric Collins and Scott Pose in the booth, that the streak was snapped. Smith told me later, “That’s all I had to do to break the jinx, was to address it.”

This, coming from the guy who wears a #13 jersey to coach in because, “it counters all the other bad luck out there.”

But there’s more to it.

After Saturday’s loss to Nebraska, Smith admitted to me he screwed up the process. For Saturday’s game, he wore his gray baseball pants underneath his white game pants. For all the other games, he had worn white on white. You better believe, it was white on white for Sunday’s championship game, and yes, Indiana did win.

Tanner Lubach was the hero. He hit a solo shot in the 11th, on the third pitch of the inning, and for his first hit of the tournament. The ball sailed into the left-field seats to end the game, and sent Nebraska and Indiana to another Championship game Sunday afternoon.

His father, Bruce, had alerted me earlier in the day that it was Tanner’s Mom’s birthday. As we got setup for the postgame interview, I looked up into the stands and saw Laura Lubach watching us from afar. I motioned for security to bring her down to the field. It created this moment, after the interview:

You can’t tell by the video, but Laura Lubach told me what Tanner said to her during that hug: “Mom, I am sorry I didn’t get you anything for your birthday. But here is the homerun ball for you to keep.”

With tears in her eyes, Laura Lubach added to me, “I have spent many of my birthdays at the baseball diamond, but this one, I will always remember.”

And that, is why my job can be so cool.